Chlorine dioxide is a highly advanced chemical compound that is simply a reactive gas formed from chlorine (1 part) and oxygen (2 parts). First discovered almost 200 years ago, it was less than 40years ago when chlorine dioxide began to be used commercially. Ximax Environmental Solutions distributes XzioX (pronounced Zi-Ox) the commercial name for the purist form ever made.XzioX is made from mixing two liquid reagents with water to produce a high purity 0.35 %(3500 ppm) chlorine dioxide solution. XzioX – Chlorine Dioxide

XzioX is an efficacious algaecide, bactericide, fungicide and virucide that has shown superior performance over chlorine and chlorine-type disinfectantsXzioX is a safe and effective biocide and sterilising agent for both large and small-scale industrial applicationsXzioX – Chlorine Dioxide

XzioX Chlorine Dioxide XzioX chlorine dioxide solution, is a highly effective bactericide for specific Gas and Oil-Field applications when applied at various concentrations.  It works for both brine and fresh water systems in the control and abatement of poisonous and corrosive hydrogen sulfide gas (H2S) and the sulfate-reducing bacteria which occur in sub-surface injection wells.

XzioX – Chlorine Dioxide Oil Industry XzioX – Chlorine Dioxide has demonstrated unique properties during Downhole treatments. As a true gas, even in the liquid phase, it can permeate areas of the formation and well bore that other chemicals and biocides fail to do, with or without the presence of near wellbore plugging. XzioX is highly soluble in oil which gives it the unique ability to actually affect the wettability/surface tension of the oil promoting increased movement and flow without leaving any harmful residual. This combined with the ClO2's anti-plugging agent effect often yields increases in performance and production that are unobtainable by other methods. In the US trials, 50 percent increase in production occurred within one week of the application. Industry standards average about 26 percent.

XzioX – How it WorksIt works by pumping barrels of XzioX into the down hole well and under pressure & temperature the bacteria is dissolved If you add suitable concentrations of Xziox to the fracking fluid BEFORE it goes down the well ALL water borne bacteria will die. Then when the fluid is sent down to higher temperatures they cannot multiply dramatically because they are already DEAD!. Xziox also remains effective for 30 days and hence if we get the dosing levels right (trial and error with the experts), down hole or any remaining microscopic bacteria will be dealt with alsoXzioX use can be calibrated for any size oil production or well.

Eliminates Iron SulfideXzioX is highly effective at removing plugging agents, such as bacteria, iron sulfide and polymer damage, from the well bore and near-well bore formation. We administer ClO2 with Injection, Disposal and Producer well treatments yields immediate and sustained positive results including higher than predicted production. But, this can be as simple as directly applying into the Downhole.Iron sulfide plugging in the near-wellbore area is a widely recognized cause of decreased well productivity. Unlike conventional acidization, which only temporarily solubilizes iron sulfide deposits through the introduction of low pH hydrochloric acid, Ximax's Downhole solution completely dissolves iron sulfide and converts it to water-soluble iron sulfate.

InactivatesBiologicalContaminationIron sulfide deposits that cause plugging in the near-wellbore area are formed through the metabolic activity of Sulfate Reducing Bacteria (SRB) that are introduced into the well as biological contaminants during workover, hydraulic fracturing and maintenance operations. Environmental conditions deep within the well are typically warm and anaerobic (i.e. no "free" oxygen present). SRBs thrive under such conditions, utilizing ubiquitous sulfate as a "combined" source of oxygen to complete their metabolic cycle, leading to the formation of iron sulfide deposits and hydrogen sulfide (H2S) gas as undesirable byproducts. Chlorine dioxide is a potent biocide that inactivates all forms of microbial life with which it comes in contact, including SRBs. Ximax's Downhole solution inactivates SRBs present in the near-wellbore area, thereby preventing the formation of iron sulfide deposits that impede well performance.

Removes Polymer DamageWell plugging by polymer products used during well drilling, hydraulic fracturing and stimulation operations is another well-recognized cause of decreased well performance. Although critical to carrying out these procedures, residual polymer material can impede well performance if it remains in the near wellbore area following completion. XzioX Downhole solution has been shown capable of removing such residual polymer damage. Upon contact, ClO2 solution breaks apart most commonly used polymers through destructive chemical oxidation, thereby facilitating their release from the near wellbore area. 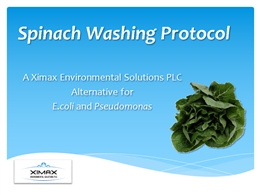