What is internet crime?
Computer crime, or cybercrime, refers to any crime that involves a computer and a network, where the computers may or may not have played an instrumental part in the commission of a crime

What are the main types of these crimes?
Pop up ads
Telemarketers
Prank phone calls
Junk emails
“You’ve won a _______”
Computer hacking

What does “Computer Hacker” mean?
People committed to circumvention of computer security. This primarily concerns unauthorized remote computer break-ins via a communication networks such as the Internet, but also includes those who debug or fix security problems, and the morally ambiguous

Anonymous Group
Anonymous is a loosely associated hacktivist group. It originated in 2003 on the imageboard 4chan, representing the concept of many online and offline community users simultaneously existing as an anarchic, digitized global brain. It is also generally considered to be a blanket term for members of certain Internet subcultures, a way to refer to the actions of people in an environment where their actual identities are not known. It strongly opposes Internet censorship and surveillance, and has hacked various government websites. It has also targeted major security corporations. Its members can be distinguished in public by the wearing of Guy Fawkes masks.

Recent internet crime
Thousands of Twitter users have received emails warning their account has been compromised by a third party.
Twitter gave no indication of the cause or source of the compromise, and would not share details of the size of the issue.
In a statement, it said: “When we believe an account may have been compromised, we reset the password and send an email letting the account owner know this has happened along with information about creating a new password. This is a routine part of our processes to protect our users.

RCMP
The RCMP Calgary Commercial Crime Section has charged two men with fraud after a two-year investigation revealed documents were falsified to obtain federal grants worth thousands of dollars.
Two years ago, the RCMP received a complaint from Aboriginal Affairs and Northern Development Canada (formerly Indian and Northern Affairs Canada) reporting that someone may have provided false documents in their grant applications.

An investigation revealed the department had issued grants exceeding $187,000 to support business projects, which RCMP confirmed did not exist.
Gerald Eugene Crick, 43, of Edmonton, has been charged with three counts of fraud over $5,000, three counts of uttering forged documents, three counts of accepting a benefit as a public official, three counts of laundering the proceeds of crime, and one count of fraud in connection with the duties of his public office.
Daniel Kutarna, 34, of Crossfield, has been charged with fraud over $5,000 and laundering the proceeds of crime.
RCMP said the charges relate to offences that took place between July 2003 and February 2006.

“Every one who, by deceit, falsehood or other fraudulent means, whether or not it is a false pretence within the meaning of this Act, defrauds the public or any person, whether ascertained or not, of any property, money or valuable security or any service.”

Why is downloading not a “crime”?
We say that downloading/burning cd’s/ect, isn’t a crime.
We only say that because it’s so easy to do.
Everybody has committed internet crime whether they realized it or not.
Even lending you cd’s to a friend is a form of crime.
If you haven’t paid for what you’re taking whether it be music or movies, it’s a crime.

How can you protect your computer?
Change you passwords so they’re not all the same.
Have a pop up ads blocked.
Install a virus combater.
Don’t leave your computer open in public places. 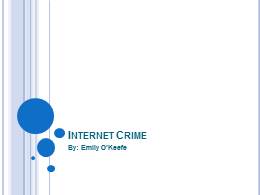