Deuteronomy 32:8When the Most High gave the nations their inheritance, when he divided all mankind, he set up boundaries for the peoples according to the number of the sons of Israel. (NIV/KJ). OR according to the number of the sons of God (New Jerusalem/ Masoretic text--the authoritative Hebrew Bible) First mention of division of nations by the Creator. So why did God do this? ---Bible silent on this. One of those things beyond us, but he saw it necessary.Evidence in creation (Devine purpose /architecture ) Each species having variety...e.g. cats (lions, leopards, cheetahs etc.) Each continent tends to have differing ethnicity. Taken down to molecular level, each individual is unique, even identical twins are not the same… So God has in his design purposely diversified his creation.Billions of stars each on their own courseSo how many of us wake up and celebrate our being unique and African? Do we thank God for making us just who we are, African?First Separation

So why do we have trouble accepting this diversity? Whose order are we trying to follow?Link to ancient city states…legend of Nimrod son of Cush, Noah’s grandson who became ruler of the earth…(king of Shinar—in the east) …set a new system (security, peace, as an excuse)—compare with todayThis system had one language, one religion, one voice and intending to replace the Kingdom of God!---seemed like a good thing to the people at the timeSystem he set up led to the tower of babel...(Genesis 11)Sought to challenge the heavens…God intervened…second separation of nations based on language …according to scriptureSeparation remained until recent times …the so-called GlobalisationSecond separation

Why am I telling you about the separation/division of nations? It links directly to culture and heritage. This divisionIs not to be confused with apartheid/colonialism/imperialism…etc.Man’s system not just or righteous as it seeks to subdue other nations to satisfy other nations’ greedSame as when humanity tries to unite, motives not always righteousGod’s separation righteous and just

God’s approach is just---has provided for all nations fairly.No nation rules over another or expected to take another’s inheritance(Duet 2—Israel not allowed to pass through the territories of the children of Esau—because God had given them that land…)God does not expect one nation to emulate another Israel is persistently punished for following other nationsProverbs 5:5-21—Drink from your own cistern (keep to your ways, do not go whoring after other people’s ways)Linked to geography—each nation has a clear geographical location (Africans, Arabs, Europeans, Native Americans, Australian Aborigines and so on)Linked to genetic variations (ethnicity not probable by quite clear)Has given rise of different cultures and heritage– language, unique way of being, e.g. Ubuntu, specific food, climate etc. God’s separation…

What is culture? The arts and other manifestations of human intellectual achievement regarded collectively. It was first used in classical antiquity by the Roman orator Cicero: "cultura animi" (cultivation of the soul).What is heritage: Valued objects and qualities such as cultural traditions, unspoiled countryside, and historic buildings that have been passed down from generation to generation.My own understanding: A way of being, for a peculiar people. This covers: Geography, Food, Language, Economy, Customs, Genetics, Dress (appearance) etc. Christianity is not an excuse for denying who God has created you to be. If it was, the gentiles would have had to convert to Judaism… 1st Christians and evangelisers were after all Jewish…Culture and Heritage

GeographyAfrica, Asia, Europe, Australia, Americas, Middle East (each being unique)FoodEach area has its own food according to the climate and genetics of the land and its people—very much important for good health… what do we eat now?Language (not dialects...e.g. the Ntu)Says a lot about where people have been and where they are going. Each language develops with the history of a people and is key to understanding identitySynonyms- Darkness made synonymous to evil—Ok for the white man, not good for the black-confusing the psych—when is darkeness ok (as referenced to africans) and when is it bad (as referenced to evil)? (See Genesis 1—God does not pronounce darkness to be evil)Idioms---e.g. a “rainy day “in Africa is good!Aspects of culture…

Education—Education needs to be aligned to who we are…not to uphold the system that oppresses us (African education is inter and intra and multi-disciplinary--- does not break up things into separate chunks--- we are considered dumb because we are busy acquiring an education that has nothing to do with usHealing—herbs versus western drugs--- Chinese herbs versus African herbs. If the African herb is evil, then so is every other herb…herbs are created directly by God…Western drugs on the other hand are manufactured in a lab…do the sums!EconomyGod bestowed to all nations his variations of economy…where interest is not charged and empowerment supersedes charityIn Africa…ukusisa --Where those who “have” loan those without assets like cattle/ seeds to start them off and charge no interestJana--where people co-operate in working in each person’s field or repairing homesteads one at a time until all is done!No longer being done because we have gone following our oppressor (consumerism, disempowering charity, interest bearing debt)-brother hood deadAspects of culture…

CustomsBirths, marriage, death customNaming of children (birthday celebrations—foreign custom)Lobola (It is consistent with scripture. Abraham paid Lobola for Rebecca on behalf of his son!)—I hope all of the men here offered Lobola for their wives!Burial rights and memorialsDressLinked to climate and customs (How do we fair here?)Hair, jewellery and make-up! Females (donkey tails, fake nails and lushes, Indian and Brazilian hair, make-up, Lack of respect of own body—plastic surgery) Males (metrosexuals, dress codes emanating from undesirable customs such as prison customs—homosexuality); V shaped bodies in place of a well toned bodyDefacing God’s masterpiece! Why is this acceptable? Would one deface a painting in an art gallery and get away with it? Why do we deface what God has created???Aspects of culture

So why have the children of Africa decided to despise that which God has made them to be? Example of the man who sweeps his house only to replace the garbage with the neighbour’s…madness?Slave mentality…e.g. Israel always thinking of going back to Egypt after being freed. In a book called “Pedagogy of the oppressed” an educator Paulo Freire, explains how the balance of power between the oppressed and oppressor is maintained. That the oppressed are scared of freedom and continue to receive learning from the oppressor/ former oppressor without active participation.Coveting the water from cisterns other than our ownCars, European style houses, Eurocentric views, appearance and mannerisms that resemble our former oppressors’True freedom—celebrating God given identity

Fear of self-determination (freedom) and taking responsibility. At least if we keep things this way…we can always blame somebody else. The system that gave rise to the tower of babel which is being resurrected in Morden times. (Globalisation)Its power is in its deception (seeing things upside-down- diversity now likened to discrimination---giving rise to a single way of being, same legal system, same spirituality, acceptance of abominations (coined as human rights) etc.)Its glam and glitter (like Babylon the great, Nineveh, Ancient Egypt)—the American dreamIdolatry and Adultery. Everything goes (mixing and syncretism)The attractiveness of rebelliousness and self-worship.True freedom

So I hope and pray that many of us will begin to thank God every morning for making us a peculiar people…accept God’s divine architecture and celebrate it! Look yourself in the mirror and see beauty unparalleled, both physically and spiritually.AmenEnd 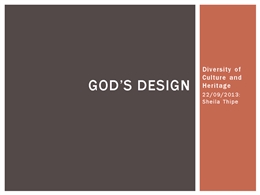