Variation in complication rate in ADM aided-implant based breast reconstruction

Variations in Complication Rates Related to Type of Acellular Dermal Matrix Used in Breast Reconstruction.Potiszil K, Walker R, Drew PJ, King PM, Brown IM, English RE, Ahmad SDepartment of Breast Surgery, RCHT, Treliske, Cornwall, TR1 3LJAimThe aim was to determine the complication rates of implant based breast reconstruction using two different types of ADM.IntroductionThe use of Acellular Dermal Matrices (ADM) in reconstructive breast surgery is increasing. There are no studies directly comparing complications between different ADM’s MethodData on consecutive implant and ADM reconstructions between 2009 and 2012 were collected from a single unit. Strattice (Lifecell) and Surgimend (TEI Biosciences) were compared. Covariables investigated included expander or permanent implants, bilateral procedures, and delayed versus immediate reconstructions.ResultsDiscussion and conclusionADM aided implant-based reconstruction is increasingly becoming popular amongst both patients and surgeons. There are numerous ADMs available to be used in the market, every manufacturer claiming their superiority. In our study, we have compared complication rate of 2 main ADMs being used in the UK. To our knowledge, this is the first time such a comparative analysis has been performed.Although small numbers this study shows significantly more complications with Surgimend. Further work is underway to look at the impact of patient factors and radiotherapy. ORBS 2013A total of 67 consecutive patients were studied. Table 1Demonstrates surgical details and Table 2 the complication rate. Bilateral surgery and the use of an expander were associated with a higher rate of complications in the Surgimend Group.Table 2Figure 1 Complications comparison (%)Table 1 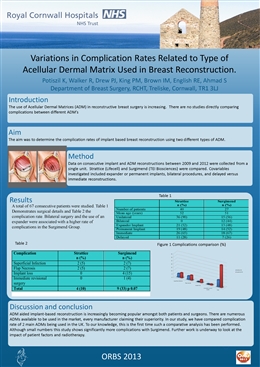 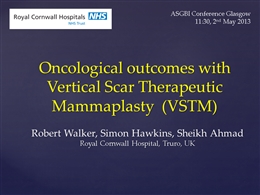