Christianity is one of the biggest religions with billions of followers all belie v ing in the same tradition of creation and living. Every religion is built on the core believes that are the main base that makes it alive and strong. Without this believes and myths there could be no understanding that one could have to answer many things. Myths are things that have not yet been proven but people have a strong believe and confidence about something. All religions have their own believes that helps them understand the nature of thin gs and have a way of conducting themselves morally. Check out 4thought.tv to learn more about this. Here are some of the core believes that are found in the Christian religion; 1 . Christian believe that Jesus is coming back According to the bible, which is the book of rules that was given to Christian and the book that has scriptures that are meant to b e followed and understood as a C hristia n , it states that Jesus(Messiah)will come back to save his people before the end of da ys. However strong this is, it is still being defined as a myth because not all communities get to agree on that or have a different explanation. 2 . Christians will be forgiven when they sin It is good to understand that God forgives people when they sin but nobody should take that fact for granted. Commit t ing sins because someone knows that they will be forgiven is not a perfect way to carry your - self out as a Christian. This is sin and also consider ed kind of religious blasphemy and it is not right to sin b ecause you will be forgiven. 3 . Christian life is full of fun and smooth Many people who do not have a deep understanding of the core of Christianity and how they should conduct themselves do things without knowing what it really takes to be a good Christian . For one to be will. 4 . Only Christians go to heaven Many people believe that only Christians will go to heaven while some involving a portion of Chri stians will not really believe in that. Many people believe that there is only one God and is refer r ed in a different name in other religions. Many Christian also believe that Heaven is only for the saved ones and those who believe in Christ, truth could b e that the others also believe in him but only call him in a different name. Learn more at P aul Blanchard as he discusses real Christian issues. 5 . You have to be baptized buy water to go to heaven Jesus Christ was baptized and Christians also believe that we need to follow his example and also get baptized. Many others believe that for one to qualify and be worth of the glory of heaven, one should be born again through the baptism. cleansing and without, it may be impossible.

6 . Everything happens for a reason plan. It is always believed that God being the creator of heaven and earth plans everything that is in it and surrounds it. There is time for everything and everything has been planned. No matter how hard the times get, the y are meant to be that way only f or a reason, probably to make us strong and be able to understand things better and be prepared. It is also believed among most Christians that God has a blueprint for 7 . Heaven will be a boring place This is one of the modern myths that believed by just a small portions of individuals. This is contrary of w hat many believe and as it has always been believed that heaven is a paradise and a place full of joy and no sorrow. Those believing in this have taken a direct life translation of the suffering of the poor Christians that are on earth in comparison with the rich who have better lives and seem to be more redundant in Christian life. This has led to some to believe that Heaven will be boring. To learn more, here is a Channel 4 documentary that will guide you through some morals and much about Christianity. Sum m ary Christianity has many believes that makes them hold and stay firm in it and giving C hris t ian a good understanding of things. This article g ives some h i ghlights on some of the myths that Christians believe. Visit our website for more info: http://www.4thought.tv/themes/should - britain - remain - a - christian - nation/paul - blanchard 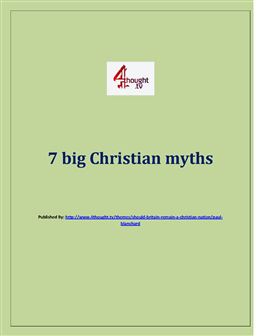