Research into the Character
Obviously we wouldn’t want the character in our trailer to show such brutality in what he does but the main concept of the character would be brilliant in our trailer, but just not so intense as. Choosing a person to be the main role in our trailer would be difficult. I myself was not very confident on the acting side of things and would prefer to be based behind the camera doing the editing and filming.
He is described as one of the most villainous characters in the series, and all his characteristics stem from his background and upbringing. Theodore Bagwell was born of both incest and rape after his father sexually assaulted his sister, who is implied to have been mentally handicapped, he was also molested by his father. He was brought in and out of prison as he grew up and lead him to be the character he is now.
It could be extremely effective if we could include such characteristics that T bag posses in prison break, or even to portray similarities between this character we have researched and the character that would be featured in our film.

Knepper (actor of T bag) says, "I never play him like a stereotypical racist or redneck. He's actually quite cunning and smart.“ This is exactly what we would aim to portray in our trailer. We wanted our character to show similar characteristics, from an early start, i.e. in his childhood days. We felt we could include these characteristics in scenes such as flashbacks, but we would discuss this later. 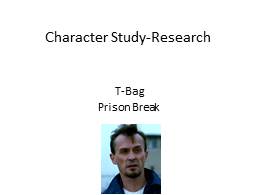