Why you should read Julius Caesar.ppt

Why you should read Julius Caesar.ppt... Read more

Why you should read Julius Caesar.
An informative PowerPoint by twofoursixohpun
Be grateful
Or don’t be I don’t care
I’ve got nothing better to do

This is Caesar
Caesar is arrogant
He constantly ignores warnings because he is the Noble Caesar and he is greater than death itself
No joke, he says that at one point
I think
Wouldn’t surprise me.
He is not a salad
Or a pizza place, as stated
He is a dictator who wants to be king but he won’t because it’ll annoy the public
We think it’s not certain what Caesar will do
Spoiler alert: Caesar is also not our protagonist

This is out protagonist
This murderous cutie is Brutus
Spoiler alert: He’s killing Caesar
He really likes Rome. He likes Rome more than he likes Caesar, his wife, and Cassius
He likes Cassius a lot
Rome-er before Boners
He likes being noble too. He’s known as the honorable Brutus by everyone
He’s so noble that he often screws shit up because he’s thinking about the honorable thing to do before the thing that makes the most sense.
Did I mention he likes Cassius
I did didn’t I.

This is Cassius
He is Brutus’ friend.
He’s friends with a lot of other people too.
Cept Caesar
Caesar does not like Cassius
Mark Antony does not like Cassius
Octavius does not like Cassius
I like Cassius but that’s besides the point
If something goes wrong or bad in the play and it’s not Brutus’ direct fault, it’s probably Cassius’
He manipulates everything
He panics really easily though
He threatens to kill himself a lot
Spoiler alert: pay attention to that above bullet
Idk, I think he’s in love with Brutus but that’s neither here nor there.
He wants to seduce him.
“For who so firm that cannot be seduced?”- Caius Cassius
Cassius wants to kill Caesar
Mainly because he doesn’t like him.
My Baby
OTP

This is Mark Antony
He’s Caesar’s bro
When shit goes down, Mark Antony makes shit happen.
Acts III, IV and V can be described as “Swiggity Sweaser, they killed Caesar” and “Swiggity Swag, Antony is mad”.
He’s a sarcastic little bastard.
He’s also pretty
Tumblr would like him
Later he goes on to screw Cleopatra, who was Caesar’s girlfriend but that’s neither here nor there
Mark Antony does not approve of this power point

Why you, yes you, should read this play.
To get some culture
To join the Brutus/Cassius ship
That book John Green wrote? “The Fault in Our Stars” is actually part of a quote from this.
It’s actually a quote by Cassius to Brutus
A love story has a quote by Cassius to Brutus as its title
I find this interesting
Odds are you’re going to have to read this for school so why not now
It’s Shakespeare he’s written a few hits in his day

In summary
Read this play
Or hell, watch the movie. The movie is really good
I recommend the 1970 movie a bit more than the 1953 one
The Cassius in the 1970 movie is my favorite
He and Brutus are very gay in that one idk
There’s also an animated version
Animated Casca scares the hell out of me tho
yes 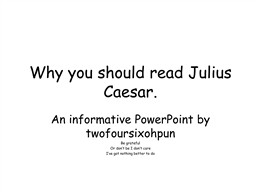