Diablo 3 was scheduled to be released by the end of the year 2012.

Diablo 3 was scheduled to be released by the end of the year 2012. It boasted the addition of the meaning player versus player. In an player mode were not release d on schedule. Yet after the scheduled release date, the same lead game designer made another statement in a blog post confirming that the player versus player mode will not be released until the year 2013. In March of 2013, Wilson made an announcement con Team Deathmatch Pvp mode would now not be released with the latest version of Diablo 3. Diablo 3 Player versus player arena based Team Deathmatch mode is not a completely new idea. It is a new take on a similar model that was played at BlizzCons in the past. Wilson says that the PvP mode will be released as a patch of its own after the release of Diablo 3. This is highly disappointing. Most of us pre ordered Di ablo 3 under the impression that we would also get the PvP mode with it. Suddenly, I am thinking that Diablo 3 may not be all it was cracked up to be. Maybe it will even be a complete and total sales flop. We have waited ten long years for the release of t his Diablo 3 PvP mode! The game producers should be concerned that their customers may be tempted to go elsewhere after such a long wait. A month after his March 2013 statement, Jay Wilson was asked by AusGamers for an idea of when PvP mode would be releas ed. The interviewer just asked for a rough time sketch. Wilson hs? A year? I would say that if it showed up close to the end of the year, what

This sketchy non - answer answer is not very hel pful to those of us who have been kept in a perpetual state of nervous excitement, only to be told that we may be in this state for yet another year. We kept hoping, watching and waiting. Our next word about the Pvp mode release was written in a blog post by Wilson. It was quite lengthy, close to one thousand words. Sadly the actual content in the words was greatly lacking. It could be summed shortly as something like, emed 2013. Blizzard is going back to the drawing board with the PvP mode. They may include elements of PvP in the new patch including objectives and rewards other t han just waxing your fellow team players. players held high hopes of seeing come to reality. They had already pre - purchased the latest $60.00 Diablo 3 version, ass uming that the PvP mode would be included. A lot of people felt that there money had been wasted. It is just a fact that Blizzard should have taken the failing Pvp mode to the cutting floor long before they did to save their customers some disappointment. They blogged about the Pvp mode release right up till the end of the year and then failed to release it. So what is the positive note we can take away? Well, when Blizzard finally releases its new and improved PvP mode, it will most likely be worth the wai t. Some things are better late than never, be disappointing to its consumers. They did not feel that the PvP mode version they were working on was up to par. It speaks well of them to be waiting to release a better quality product. Diablo 3 itself was pushed out too quickly and had a lack luster feel. We will all be watching and waiting to see if our patience will pay off in the long run. Come on, Blizzard, you have a shot Summary Diablo 3 Matchmaking Fight is a famous game designed by the famous game designer Jay Wilson. people are very much crazy about Diablo 3 and they want to include PVP mode in the new version of Diablo 3 . Then v isit grand4you.de and find out more Visit our site to learn more : http://blog.grand4you.de/diablo - 3 - matchmaking - fight/ 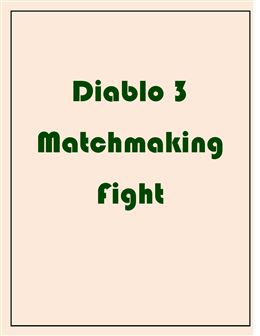