The colonials revolted against the English Crown because they resented how they had no say in the matters of the colonies. England was a far off island that was trying to control the matters of a distant continent but did not want to hear anything the colonists had to say.
In 1870, nearly 80 years after the American Revolution, the United States Congress approved the 15th Amendment that prohibits denying the right to vote based off race.
In 1920, the 19th Amendment was approved giving women the right to vote.
In 1964, President Lyndon B. Johnson signed the Civil Rights Act to prevent racial discrimination and later in 1968 the Civil Rights Act of 1968 was passed as a follow up.
Background:
The Right to Vote-& Civil Rights

The colonists revolted because they wanted to be represented, they wanted a voice, they wanted to make a difference in the matters of the country.
For almost 200 years, people fought against slavery and discrimination with civil disobedience to acquire rights they deserved, especially the ability to vote to decide matters in the country.
Women like Mary Wollstonecraft and Susan B. Anthony fought for over one hundred years just so they could go to the polls and decide who could help lead governments.
So when it comes down to it, what is the importance? People fought to acquire the right to vote, it has been a process of over hundreds of years, and it has been something that so many people have passionately fought for.
And we are lucky to have the right; so many places in the world are under oppression, and many of these citizens are fighting so they can have a say in their country.
The Point?

What is the point to all the hard work people have put in over the years to let a legal citizen be able to vote, and we do not?
Out of all democratic countries, the U.S. has one of the lowest voter turnout rates. We are the most iconic democracy in the world. Yet we are being left behind.
According to the Population Characteristics issued in July 2012 by the U.S. Census for the 2008 election, only 63.6% of the population reported voting.

The Problem: Some People Do Not Vote

Why is this a Problem?
People have the right to go vote but many do not go out and vote.
We, as a Country, provide the populace the opportunity to choose our leaders who will make a difference, not only on the local level, on the global scale, but so many people do not take advantage of this opportunity. They are not exercising their right to vote.
Some things cannot be changed about voter turnout, such as apathy, medical and family emergencies, or bad weather.
But something that can be changed is that we can give people more time, we can provide them the full chance to vote.

A National Holiday for the Working World
Many of these people are just too busy and the major reason behind this is work.
According to USA today, California Voter Foundation, and the United States Census, work was listed as the biggest obstacle that prevented people form going out and voting. USA Today lists the top reason given by unregistered voters for not signing up to vote is how busy they are in their lives (Page).
The California Voter Foundation states that 28% of infrequent voters and 23% of those unregistered exclaimed that they do not go out and vote because they are too busy (Longley). According to the United States Census, the biggest reason behind people not going to vote has been work.
Although the percent has shifted from 20.9% in 2000, to 19.9% in 2004, to finally 17.5% in the election in 2008, the percentage that lists that they are too busy to vote are roughly almost 20%. Almost one out of every five people declines to go vote because their lives are so packed.

Election Holiday
People who have busy work schedules are limited to either go early in the morning, after work, or during lunch breaks. Their breaks are small, roughly a half an hour to a full hour, and with lines that can take up to ten hours during those rushes, it is not feasible for a worker to vote. Just as The Penguins noted.
Many workers have their personal lives filled with so much to do, going out and possibly spending hours to go vote just is not worth the effort.
The average American worker, 25 to 54, with children at home has about four-five hours of free time.
After working about a nine hour day, taking care of ones’ home and children, nobody wants to spend all that time, maybe even cutting into sleep, to go out and vote.
If a worker goes out to vote, and they miss work time, they are going to be docked pay. It is as a poll tax was being levied on them for going to vote.,
”About the Charts”

Ease The Rush
If everyone is working then there tend to be three major rushes, before work, lunch break, and after work.
Many polling locations are ill-equipped for these rushes and the time it takes a person to vote dramatically increases, especially in urban areas.
With the day off, people would not need to balance working with voting, they could just go when they have the time.
Passing legislation for a national holiday would also ease the stress of poll workers. If one fifth of people cannot find the time to vote, imagine how few can find the time to devote their whole day to manning a polling location. The number of people who could work the polls would also increase.

Another Day off?
United States does not have many holidays; many other democracies have even more. For example Nigeria, Morocco, and South Africa have 16 national days. Poland, Cuba, and France have 13 national holidays. Sweden has 20, China has 26, and Australia has 27. A fact to note about Australia, it has the highest voter turnout rate in world for democratic elections (“Worldwide Public Holidays and Bank Holidays”).
The United States stands with 10 national holidays, adding one more that occurs every four years for presidential elections will not make such a devastating difference, rather a positive one (“Worldwide Public Holidays and Bank Holidays”).
In addition, other countries have taken steps to meet the needs of its citizens while promoting civic engagement. Some countries have made Election Day to be a national holiday, other countries have chosen to have Election Day on the weekend, and European Union has expanded the election process over the course of 4 days (Jost).


While it may seem like a good idea to just move Election Day to a weekend, it will still not serve its purpose to make democracy more accessible to the entire public. This move would help accommodate those Americans that are better off and can afford to have their job only during the week.
For many Americans struggling to stay afloat, open weekends are a luxury if not a foreign concept. This means weekends would be discriminatory against a portion of the population and counter intuitive in respect to carrying out the ideals of democracy. For this reason, a National Holiday would be the best option for The United States of America (Jost).

College Students
College Students feel as they have a lack of time: for example they have many more activities that will occupy their day. Whether it is classes, doing homework, or cramming for exams, students are more focused on those things rather than remembering to send in an absentee ballot or going to register.

Not having class, not having exams, or homework, having nothing to worry about, college students can go drop their ballot and relax for the rest of the day.

One Alternative Solution
An increase in Absentee ballots has been suggested instead of passing a national holiday. This creates more problems than it solves
Tremendous amount of responsibility is left to the single voter to maintain confidentiality
Not a community process, not encouraging active participation in government
Highly susceptible to fraud. Faking a signature is simpler than gathering needed identification and impersonating a voter. (see also: lost in the mail)
These votes are received and counted after Election and may cause discrepancies

Responses-
“Yes, people that work 12 hours hardly won’t have time.”
“Yes, then hardworking people could vote too.”
“Not a whole day off, but employers should be forced to give their employees a couple of hours to go and vote.”
“Yes. Because everyone should have the opportunity to vote.”
“Why not?”
“I’d vote no matter what, it’s important.”
“People are allowed 1 day off with pay to go and vote.”
“I think we can give it a try. If more people show up to vote, then we can probably have it. Or, it can be a half day so people can work half the day and then go vote.”
“I think so. Everyone should be able to vote.”
“No, the economy is bad enough.”
“Who the hell cares about voting? I would enjoy the holiday.
“That would be good.”
“DAY OFF ERRDAY.”

In Conclusion
We have spent years fighting for our right to vote and defending our ability to vote. We need to show the importance of this day by our turnout and participation.
The biggest reason for our low turnout is due to lack of time. The average American is simply to busy to find the time it takes to vote.
A national holiday would provide a large portion of the eligible voters, the American worker, the time needed to vote.

In Conclusion
The American worker should not have to choose between work and supporting our democracy
This holiday would put an emphasis on the importance of voting in our democracy.
This would cut down on the three main rush times at the polls as well as increase volunteer numbers, allow students to give voting the attention it deserves, and provide the working American the ability to use that day to vote and support our Democracy instead of working. 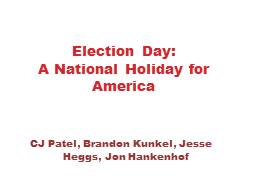 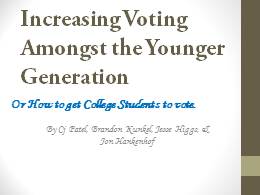