Some rarer plants of Bexley.ppt

Some rarer plants of BexleyChris Rose

Miscellaneous sites (pt 1)Common Calamint, Brook Street, Northumberland Heath. One of 3 sites in the Borough for this species. Flixweed, Russell Park, Bexleyheath. A species that just turns up in random locations then dies out again. One of 4 places I’ve found it in Bexley.Pyramidal Orchid, Bexleyheath Broadway. Only one other site in Bexley for this species, but dug up and moved to Hall Place after the Council declined to modify their plan of putting a tree and concrete in this location as part of the Woolwich building refurbishment. No soul!

Miscellaneous sites (pt 2)Crown Vetch, Erith MarshesMilk Thistle, ErithQuarryCatmint (Nepeta cataria), petrol station, Long Lane, Bexleyheath. Only site in Bexley. Appears to have been destroyed. I now have seedlings from these plants in my garden.

Lesnes Abbey WoodClimbing Corydalis (Ceratocapnos claviculata). Now one of only 2 sites in Bexley for this species.Bird's Foot Clover or Fenugreek (Trifolium ornithopodiodes). Lesser Calamint (Clinopodium calamintha) . Only colony in LondonSmall Teasel (Dipsacus pilosus). Only site in the Borough for this plant.SINC M015

Bexley WoodArrowheadby the River ShuttleSanicle by draininto Shuttle. The only Bexley occurrence. Common Cow-wheat. Once found in other local woods, this is its only remaining Bexley site. It is threatened by lack of coppicing.SINC Bx.BI(8)

(Re-)introducing Marsh Sow-thistleNationally scarce.Regionally declining. London status: BAP PriorityCrayford Marshes was the last site in the capital for it. Introduced to TRW using plants raised from seed of that colony. Seeds of TRW plants harvested for ex-situ sowing and distribution of seedlings to other London sites. TRW(Former) Marsh Sow-thistle (Sonchus palustris) site

Heathland (re-)creationBexley BAP: Encourage the expansion of heathland at Lesnes Abbey Wood through appropriate management of surrounding areas, to create an additional 0.5 hectares, and .... Explore the feasibility of healthland creation at sites identified in the London Habitat Suitability maps, particularly East Wickham Open Space, Bursted Woods Open Space, the top of Hall Place around Gravel Hill, Hollyhill, and the southern edge of Danson Park, with the aim of creating at least 1 hectare of new heathland by 2015.Heather-dominated heathland inLesnes Abbey Woods

Heathland (re-)creation potentialRemnant heathland vegetation (Gorse and Broom) can be seen at a number of sites in Bexley, including along the Bexleyheath railway line, at Barnehurst and Bexleyheath golf courses, Braeburn Park and the bottom of Birch Walk by Fraser Road. 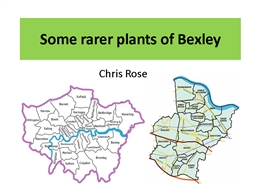